Welcome to The House at the End of the Road

Welcome to the House at the End of the Road, the online abode of Alice M. Cole.

I write sexy stories, spooky stories, and just plain weird stories. Bad Fairies, a novella about old-fashioned fairies trying to survive in present-day Boston, is available from Torrid Books! Follow this link to read a sample chapter or buy:

Bad Fairies at Barnes and Noble

Tagged welcome, welcome to the house

fudge cake recipe is a keeper

I made this cake yesterday for dinner at my daughter’s: http://www.stonewallkitchen.com/recipes/desserts/cakes-cupcakes-trifles/R100340.html

It got rave reviews from the family. Very rich and fudgy, with a nice texture. Vanilla ice cream made a great accompaniment.

I made it exactly as written, except that I used a souffle dish instead of the cake pan, and I used orange Liqueur instead of the melted jam. It would probably be good with most any jam or liqueur. I will definitely be making it again for a special occasion when calorie count is no object.

So I’m heading off to visit my family in Montana. It was the only time that worked for us. The weather’s supposed to be cold and snowy, so hopefully that means time to sit in front of the fire and write.

More likely, however, I’ll be sitting around chewing the fat with family members and eating too much barbequed ribs and chicken fried steak.

One of the fun things about writing steampunk is playing with all the pretty Victorian fancy dresses.

Here’s an especially pretty one worn by Princess Eugenie of Sweden:
http://fripperiesandfobs.tumblr.com/image/14342983526

A lot of subtler detail explained in this lovely post: http://trulyvictorian.com/history/1840.html

Oh, and I’m up over 6K for the novel, so it’s coming along nicely.

Would love to own a house on this street

I just realized I forgot to actually publish this photo from last Christmas in New Orleans! Me under the sign of the muse 😀 This neighborhood may or may not play a role in the ghost story in progress (working title Lady in Lace; most of it takes place in the French Quarter), but it’s playing a big role in my psyche since I visited there. 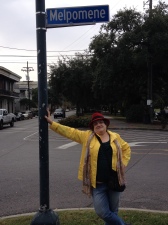 trying to get back in the saddle

Well, middlest is married and heading into the future with his wife. They’re back in California, moved into the new apartment with room for a baby due in February. They’re excited and happy. So are we. We’re making plans to be out there when the baby comes and trying to get our heads around being grandparents.

All of which is massively distracting. I had thought I’d come home from the wedding ready to get back in the saddle and just turn out the words the way I used to. It was so easy to think that the wedding distraction was why I wasn’t getting any writing done.

But of course there’s always another distraction. Sometimes you do have to let real life take over, but most of the time it’s just another factor to be dealt with. There are always distractions. I have to write anyway. Get back in the saddle. Make words instead of excuses.

I’ve been live on Amazon for quite some time, but what with middlest’s wedding and the canoe trip and all the rest of the late summer chaos, I forgot to post about it until now 🙂

If you read Bad Fairies and liked it, please think about leaving a review.

Middle child is getting married Friday. His fiancee wants to see baby pictures, so last night I dug through several old photo albums looking for the best ones. It’s amazing to think that such a small baby is now all grown up and on his own and ready to start his own family.

And it doesn’t seem like that much time has passed, either.

We played golf this morning at the same local course we usually play. Today as I walked up to the third tee, I found myself surrounded by big yellow-and-black buzzing insects that looked a bit like yellowjackets. They seemed to be digging nests in the ground but fortunately I didn’t step on any.

When we ran into a course maintenance crew, I mentioned the insects, figuring that though I didn’t get stung, the next person might not be so lucky.

The groundskeeper told me they aren’t stinging wasps at all. They’re a kind of mud-dauber wasp called a cicada killer: http://en.wikipedia.org/wiki/Sphecius_speciosus.

They’re called cicada killers because the female paralyzes cicadas with her sting, then carries the victim to the burrow to be food for her larvae. They’re very non-aggressive to people. The groundskeeper said if you scuff over one of the burrows, they just come out and open it again, then go back into protective mode. If you bury it again, they do the same thing.

They’re technically solitary wasps even though dozens of them will live in the same area and two or three females will sometimes share the same burrow.

So that’s the cool thing I learned today 🙂 What about you?

Not Quite Amish
Erin's random thoughts